Vada, full name Venkata Narasihma Raji Vadu, is a main character of Simple Samosa. He is Samosa's friend and a resident of Chatpata Nagar.

Vada is round in shape and his body colour is orange. There is a small hole in the middle of his body, which is where his eyes are located. He wears light green shorts and white-blue shoes.

Vada, the trusting youngest member of Samosa's group, is also Samosa's #1 fan; as such, he likes to refer to him as "Samosa-Bhaee" (pronounced "Samosa-Bhaya" and translated for one of the English dubs in the first season as "Samosa-Bro"). He is known to be very quick at thinking, which tends to come in handy.

He may be too young to tell fiction from reality, as he believes all of Samosa's exaggerated stories, including the tale of how he apparently defeated two Sumo Momos in the episode "Sumo Momo".

The episode "Cultural Programme" shows he is absolutely terrible at playing the violin.

The episode "Kheer" implies that Vada is unrecognizable to everyone if his hole is plugged, as he has his hole blocked by a bowl Samosa places in it for a sizable portion of the episode and he keeps having to clarify he's Vada even to his own parents, who think their son has gone missing.

He has a childhood friend named Bonda Kumari that he went to school with. Their relationship was strained when Bonda proved to be much better at winning lots of school programs than Vada, but near the end of "Bonda Kumari Kabhi Na Haari" they become good friends again after Vada saves Bonda from a whirlpool during a beach festival.

Vada, being a main character, appears in every episode of the show, as well as in Simple Samosa Game as one of the playable characters.

Prototype artwork of Vada from a Simple Samosa promo.

Vada wearing a bandana and playing a guitar (from "Dadi Ke Saath"). 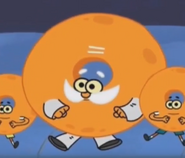 Vada in his cricket uniform (from "Cricket Match").

Vada in a space suit (from "Space Snax").
Community content is available under CC-BY-SA unless otherwise noted.
Advertisement