"There is nothing better than a Simple Samosa!" ― Said by Samosa in a handful of episodes.

Samosa, full name Simple Samosa, is the protagonist and title character of the series. He, like the other three main characters Jalebi, Dhokla, and Vada, is a resident of Chatpata Nagar.

Samosa is light brown in colour and is shaped like a triangle. He wears red-colour shorts and white-green spiked shoes.

Samosa is vibrant and enthusiastic, and he is always ready to take a look at whatever odd things happen in Chatpata Nagar, and to save the day if needed. He has a tendency to lie about various accomplishments he has never actually done; all of his friends except Vada realize these stories are not true, but they all still consider him their best friend either way.

Samosa is also a bit prideful, as not only do his previously-mentioned stories usually involve him achieving some impressive feat, but in the theme song he calls out the other characters for describing themselves as "simple" and "really cool" in the lyrics, insisting that these descriptors only apply to him.

Samosa hates to have the tip on the top of his head cracked; in "Sumo Momo", he goes as far as to beat up Sumo Momo when one of his wrestling moves results in his tip cracking and tells him to "never mess with my tip, okay?".

Samosa is first shown to have a grandma in "Dadi Ke Saath" and an aunt named Meethi Masi (Aunt Sweetyhearty in English), as well as a massive amount of cousins, in "Meethi Masi". Only a relatively small amount of these cousins are known to have names, those being Tweety, Cutie, Fruity, Harinder, Sweetie, Goldie, Pinky, Happy, Shinky, Lucky, Dimpy, Lovely, and Simmi.

As Samosa lives in his house completely by himself, not much is known about his immediate family. He does have a dad as mentioned in "Jalebi's Birthday".

Dhokla, Jalebi, and Vada are all Samosa's best friends and will often follow him around on his adventures. Jalebi tends to call out Samosa whenever he tells one of his signature exaggerated stories, but still cares for him as a best friend. Vada thinks of Samosa as his "superstar" and calls him "Samosa-Bhaee" (pronounced "Samosa-Bhaya"; English translation "Samosa-Bro").

Cham Cham is Samosa's arch-enemy and is always trying to do mean things to him to show how much better he considers himself compared to him. As a result, most of their interactions are not positive, with Samosa himself going as far as to let Cham Cham fly into the air with his ladder of kites without helping him down in "Patang Hurdang", even though Cham Cham did nothing to Samosa beforehand.

Samosa, being the main character of the show, appears in all the episodes of the original show. He is also one of the playable characters in Simple Samosa Game.

Samosa doing a dance in a promo for the show.

Samosa as a superhero (from "Comic Book").

Samosa as a dinosaur (from "Comic Book").

Prototype artwork of Samosa, from a promo for the show.

Samosa as an umpire in a game of cricket (from "Cricket Match"). 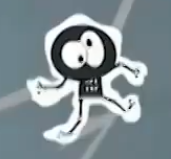 Samosa at the end of Simple Samosa Game.

Samosa after working out at the gym (from "Shakti Samosa").

Samosa after becoming a victim of the spicy epidemic in "Chhote Rajaji".

Samosa in an astronaut suit (from "Space Snax").
Community content is available under CC-BY-SA unless otherwise noted.
Advertisement