Dhokla, full name G.K. Dhokle, is one of the main characters of Simple Samosa alongside Samosa, Jalebi, and Vada. He, like the aforementioned characters, is a resident of Chatpata Nagar.

Dhokla is white in colour and square in shape. He has a green leaf on his head. He wears light blue pants and light blue shoes.

Dhokla is considered the "big brother" of the group. He is kind, caring, and cautious, and will always question the safety of any of Samosa's proposed schemes. He also increases in size similarly to a sponge whenever he consumes a liquid, and he burps and farts more than the other characters. He is also mistaken to be a sweet many a time by Samosa and many other characters, even though he keeps repeating that he is not a sweet.

In "Doctor D", Dhokla temporarily becomes a celebrity called Doctor D. During this time, he ignores his friends, as they had blocked him on social media beforehand which is what led to him taking up the alias in the first place, thus straining their friendship. They do eventually apologize to him for their actions, after which he drops the alias.

In "Kheer", he temporarily becomes the mayor of Chatpata Nagar after an incident involving Mayor Royal Falooda being humiliated for being naked in public.

In "Toast Malone", he becomes so obsessed with the music from a rapper named Toast Malone that he listens to it in unhealthy amounts. Samosa tries to intervene, only for Dhokla to find some way to keep listening to the music; his efforts culminate in Dhokla selling his house for golden headphones to still listen to the rap songs.

He has a grandpa as shown in "Telephone Bhoot".

Dhokla, like Samosa, appears across all episodes of the show. He is also a playable character in Simple Samosa Game. 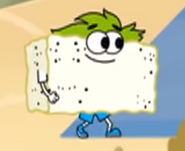 Dhokla in his Doctor D outfit (from "Doctor D").

Prototype artwork of Dhokla from a Simple Samosa promo.

Dhokla in his cricket uniform (from "Cricket Match").

Dhokla's skeleton, as shown in "Patang Hurdang" (Dhokla is on the left, Jalebi is on the right).

Dhokla without his hair (from "Hair Today Gone Tomorrow").

Dhokla without his spots (from "Sabse Sweetest Kaun?").

Dhokla after absorbing too much chutney (from "Chutney Dam").

Dhokla in a space suit (from "Space Snax").
Community content is available under CC-BY-SA unless otherwise noted.
Advertisement