"Sumo Momo"
Cham Cham, full name Cham Cham Chakraborty, is a supporting character in Simple Samosa. He is a resident of Chatpata Nagar.

Cham Cham's body is white and shaped like a capsule, and there are two arms and two legs attached to it. Cham Cham has two circular eyes with blue sclerae and black pupils. He wears a pair of black, square-shaped glasses, white shoes with red accents, and blue pants; he also has yellow shirt sleeves on his arms.

Cham Cham serves as Samosa's rival figure. Cham Cham hates Samosa and his friends and is always looking for ways to beat them at everything, or otherwise make them miserable, but his attempts to do so always backfire and he usually bears the brunt for his actions. Besides that, Cham Cham is greedy and selfish in general, as show in "Mayor Gaayab" when he becomes the mayor of Chatpata Nagar and acts like a ruthless king. 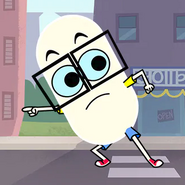 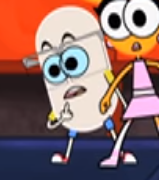 Cham Cham as he appears in the first episode, "Sumo Momo" (note his glasses are a lighter gray than in later appearances).

Cham Cham in his cricket uniform (from "Cricket Match").

Cham Cham in a princess outfit (from "Khelo Samosa").

Cham Cham without his glasses (from "Khelo Samosa").

Cham Cham in a king's clothing (from "Mayor Gaayab").
Community content is available under CC-BY-SA unless otherwise noted.
Advertisement